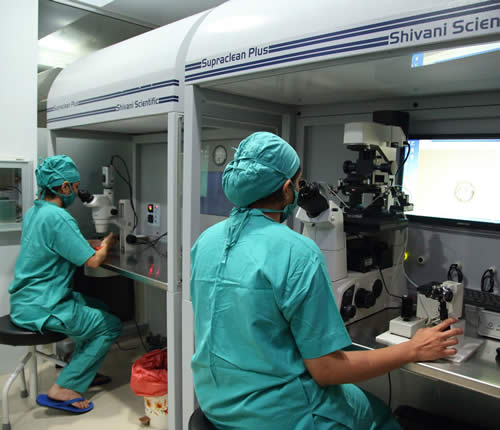 In IVF, this process of fertilisation happens outside the woman’s body. A woman’s eggs are surgically removed and fertilised in a laboratory using sperm that has been given as a sperm sample. Next, the fertilised egg, called an embryo, is implanted into the woman’s womb.

All IVF treatments begin with a course of hormone therapy to stimulate the development of several follicles in the ovary. These are collected as eggs, which are then fertilised in a test-tube (‘in vitro’) to create several embryos. After between two and five days in an incubator, one or two of these embryos are transferred through the vagina to the uterus, where implantation occurs and pregnancy begins. However, in IVF as in natural conception, not every embryo implants to become a pregnancy, which is why surplus embryos are frozen – so that a subsequent transfer might be tried if the first one fails. Freezing is now an essential part of every clinic’s IVF programme.

What Happens In An IVF Treatment Cycle

Typically an IVF cycle consists of ovarian stimulation, egg collection, fertilization, embryo culture and embryo transfer. Ovarian stimulation consists of daily injection of hormones to the female partner with frequent clinical and ultrasonographic monitoring. This usually continues for 10-15 days. Egg retrieval is performed under anaesthesia through the internal route. There are no incisions or scars. The egg and sperm are either mixed (IVF) (Figure 1) or the sperm is injected into the egg (ICSI –intracytoplasmic sperm injection). The fertilized egg forms the embryo. The embryo is cultured in the laboratory for 2-3 days. Two-three best embryos are selected and transferred into the womb (uterus) on the second or the third day. The pregnancy test is done 14 days after the day of embryo transfer.

What Is The Success Rate of This Process?

It all sounds so logical and definitive that one would expect success in every case! But unfortunately this is not the reality. One must understand that in the entire process of IVF each step is a hurdle that has to be negotiated successfully. For example, not all women respond to ovarian stimulation, not all eggs are mature, not all eggs fertilize to make good embryos and not all embryos implant. Therefore, there is an attrition or drop out at each stage. It is at the stage of implantation that there is a huge scope for further research. Implantation is the process where the uterus accepts the embryo which then develops to form the baby. Much work has been done on this aspect of IVF and medications such as steroids, aspirin, heparin, sildenafil are being tried to improve implantation rates. The overall success rate of IVF is about 40 % per treatment cycle. In order words 4 out 10, who otherwise had given up all hopes of parenting a child would conceive after attempting IVF. World over the success rate is highest in younger women where it can reach up to 60% per treatment cycle. In case of failure, IVF may be tried again and the cumulative pregnancy rate over 3 cycles may go as high as 80%.

ICSI is an assisted reproductive procedure used as part of a wider in vitro fertilisation (IVF) program. This fertility treatment is used in cases of male infertility, either if the quality of the sperm is causing infertility, or in cases of erection problems. ICSI involves selecting a single sperm which is injected into an egg. The eggs can be sources either from a donated egg (frozen or fresh), or eggs harvested from the ovaries of the partner.