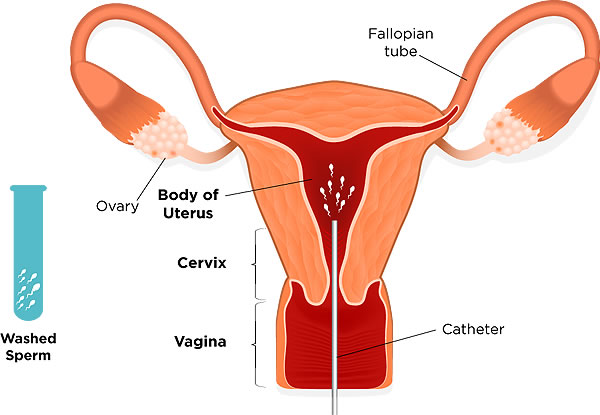 Intrauterine insemination (IUI) is a form of assisted conception. During IUI, your doctor will place washed, prepared sperm into your uterus (womb) and near to your egg at your time of ovulation. This procedure is often combined with fertility drugs to increase your chances of conceiving.

Could IUI benefit us?

IUI may help you as a couple if:

IUI isn’t recommended if your tubes have adhesions or scarring that might stop an egg travelling from the ovary to your uterus. But if you have at least one working tube and ovary on the same side, IUI may be an option for you.

IUI should not be used in women with blocked fallopian tubes. The tubes are often checked out with an x-ray test called a hysterosalpingogram.

Female age is a significant factor with IUI. Intrauterine insemination has very little chance of working in women over 40 years old. IUI has also been shown to have a reduced success rate in younger women with a significantly elevated day 3 FSH level, or other indications of significantly reduced ovarian reserve.

IUI is a reasonable initial treatment that should be utilized for a maximum of about 3 months in women who are ovulating (releasing eggs) on their own. It is reasonable to try IUI for longer in women with polycystic ovaries (PCOS) and lack of ovulation that have been given drugs to ovulate.

How is insemination performed? What is the process for IUI?

The intrauterine insemination procedure, if done properly, should seem similar to a pap smear for the woman. There should be little or no discomfort.

Most clinics offer for the woman to remain lying down for a few minutes after the procedure, although it has not been shown to improve success. The sperm has been put above the vagina and cervix – it will not leak out when you stand up.

How many IUI to try before doing IVF?

What is Donor IUI ?

Sperm donors are screened for sexually transmitted diseases and some genetic disorders. In DI, sperm from the donor is placed into the neck of the womb (cervix) at the time when the woman ovulates.