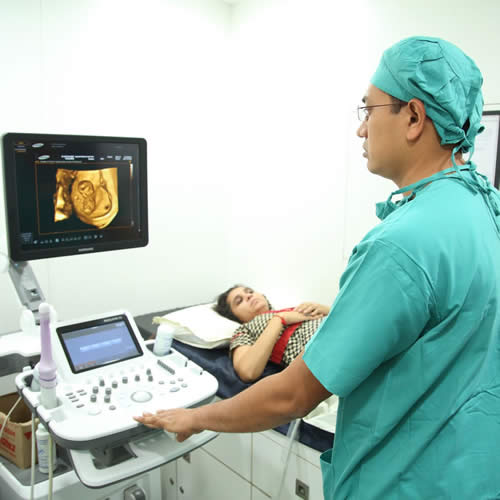 Medical ultrasound (also known as diagnostic sonography or ultrasonography) is a diagnostic imaging technique based on the application of ultrasound. It is used to see internal body structures such as tendons, muscles, joints, vessels and internal organs. It’s aim is often to find a source of a disease or to exclude any pathology. The practice of examining pregnant women using ultrasound is called obstetric ultrasound, and is widely used.

Ultrasound is sound waves with frequencies which are higher than those audible to humans. Ultrasonic images also known as sonograms are made by sending pulses of ultrasound into tissue using a probe. The sound echoes off the tissue; with different tissues reflecting varying degrees of sound. These echoes are recorded and displayed as an image to the operator.

Role of Ultrasound In IVF Treatment

Ultrasound is the most versatile method for pre-treatment assessment in IVF being the dominant instrument for assessing ovarian reserve, pelvic pathologies and for assessing the uterine cavity. The ability of ultrasonography to measure endometrial thickness in addition to detecting uterine masses gives it an edge over laparoscopy/hysteroscopy as a diagnostic procedure in uterine cavity assessment, although hysteroscopy has the advantage of therapeutic potential. Similarly, ultrasonography is superior to biochemical methods for follicular monitoring because of its ability to demonstrate the number and sizes of follicles, and guide preparations for oocyte retrieval. The relative ease of ultrasound guided oocyte retrieval; its less technical demands and the possibility of conducting the procedure under local anaesthesia have made ultrasound guided oocyte retrieval more popular across the world. Randomized controlled trials show that ultrasound-guided transfer techniques have better outcomes than the clinical touch technique in terms of on-going pregnancies and Clinical pregnancies. Ultrasonography is now the key instrument for diagnosing and monitoring pregnancy following embryo transfer, biochemical methods being complimentary.

The term “uterine receptivity” refers to a state when endometrium allows a blastocyst to attach, penetrate and induce changes in the stroma, which results in the so-called process of implantation.

What if I need frequent scans through my pregnancy?

You may be offered more scans than usual to monitor the growth and well being of your baby if you:

But even if you have more frequent scans than other expecting mums, there is no greater risk to you from the scans than to others. On the contrary, if your doctor is prescribing extra scans, it is because the information she collects from these scans helps her to ensure that you and your baby are doing well. The benefits from serial scans in monitoring pregnancies are considered to outweigh any potential risks.